I made these little gems for the Australia’s Biggest Morning Tea which was held at work to raise money for the Cancer Council (for those who are not aware!). I just didn’t have the time, or the energy to make macarons this week, but I must admit I was pretty happy with how these melting moments, aka Yoyo’s, turned out. Melting moments were one of my favourite biscuits as a child, only second to the humble Monte Carlo. I thought I would put a bit of a spin on the traditional version, and they went down quite well with my colleagues 🙂 Well enough for one of them to order some for the weekend! Also, my apologies for the crap photos, I had no choice but to take them at night. 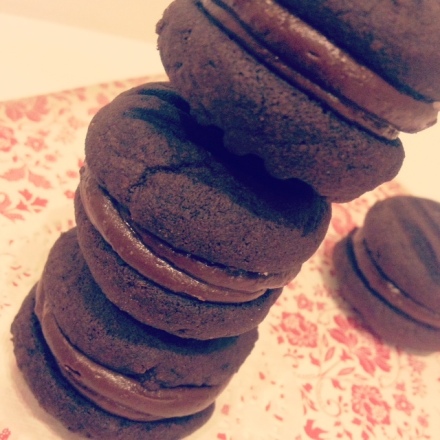 I found a great recipe for hazelnut melting moments that used nutella in the ganache, and I thought orange would go perfectly with that. The great thing about melting moments is that they are super easy, just beat the butter and add all the dry ingredients and you’re done. Plus, they kind of look pretty, too, a bit rustic, but pretty. And they melt in your mouth…..mmmmm 🙂

Hazelnut Jaffa Melting Moments: (adapted from Taste.com – I doubled the original recipe)
For the biscuits:
For the ganache:
Preheat the oven to 160c. Line 3 baking trays with baking paper, and set aside. Using a stand mixer or electic beater, beat butter until pale and creamy. Add the flour, icing sugar mixture, cornflour, cocoa powder, orange zest and a pinch of salt, and stir with a wooden spoon until well combined. Using clean hands, roll small teaspoons of the dough into balls, and place on the prepared trays (leave about 2cm in between each biscuit). With a fork dusted in cocoa powder, gently flatten the biscuit. Sprinkle each biscuit with a small amount of salt, and bake in preheated oven for 15 minutes. Remove from the oven and let cool for 15 minutes or until biscuits have hardened. 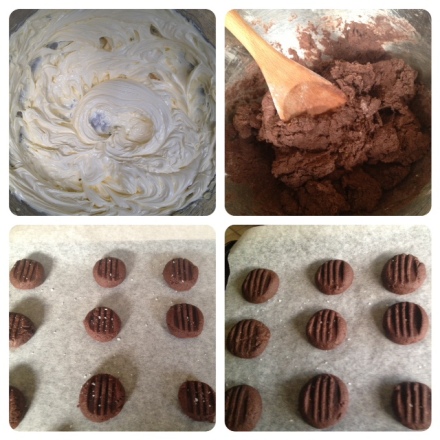 To make ganache, place chocolate in a microwavable bowl and microwave for 20-30 second increments. Each time the chocolate comes out of the microwave, stir as much as possible with a metal spoon to distribute the heat evenly – sometimes the chocolate looks as though it is not melted but will begin to melt when stirred. Doing this will prevent the chocolate burning and becoming gluggy. When chocolate is completely melted, set aside for 3 minutes. Add the 50g softened butter, nutella, orange zest and salt and mix until well combined. 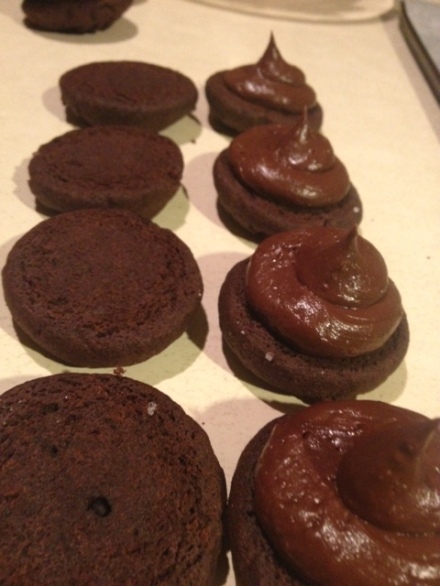 Assembly:
Pair up similar sized melting moment biscuits. To fill biscuits, you can use either a piping bag or a knife. To use a piping bag, spoon ganache into a piping bag fitted with a wide round nozzle. Sandwich together with remaining biscuit. Melting moments are best stored in an airtight container at room temperature, and are best consumed within 1-3 days. Yum! 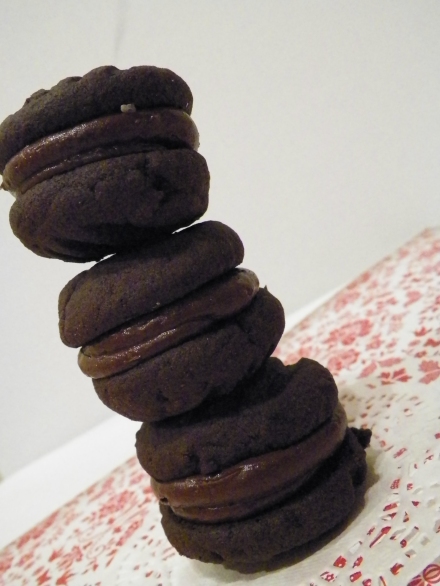 One thing is fairly obvious: I love cake. I try not to eat tooo much cake, but with this one, it was difficult to stay away. I was convinced this cake would be super-rich, but surprisingly, it was quite light. It was certainly still decadent, and I will definitely be making this one again. I know I say this with a lot of things, but I’ve had the idea of making this cake in my head for quite some time. My Mum’s birthday seemed like the perfect occasion – as she (and my Dad) both love the Jaffa Macarons, and I haven’t done ombre, or any type of layer cake really, for a while.

The recipe I used for the orange cake is from the always amazing Raspberri Cupcakes. It is a beautfiul cake, not too buttery, and the zest from the oraange was intense, but in a great way. This particular post – Orange Cake with Fruit Tingles Icing, is one of my favourite posts from Raspberri Cupcakes, and was one of the recipes I was inspired by, to begin blogging myself (see Musk Layer Cake + Musky Macarons)! 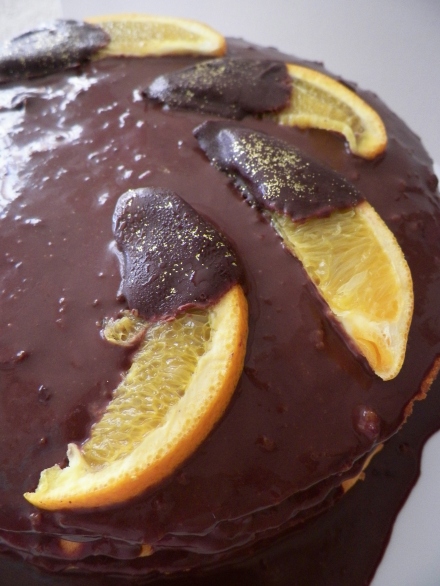 Orange Cake: (adapted from Raspberri Cupcakes)
Preheat the oven to 180c (170c) fan forced. Line a 22cm springform cake tin with baking paper and set aside. Beat butter until pale and fluffy. Gradually add sugar. Beat eggs in one at a time until well combined. Stir in the orange zest and juice and flour, until well combined. To divide cake into batches, weigh mixture and divide the number by 3. Pour into three separate, clean bowls. Add small amounts of colouring gel to mixtures, until you have 3 clearly different shades of orange. Pour one batch of mixture into cake tin, and spread with a spoon so it is nice and even. I had a little bit of trouble with this because the cakes were so small, but they were all fine in the end. If you have more than one cake tin, it is okay to put two on the top shelf of your oven, if they fit. Bake cakes for 10-15 mintutes, or until a skewer comes out clean. Begin checking the cakes from 10 minutes.
Let cakes cool in the tin for 10-15 minutes. If you are using the cakes straight away, let them cool completely on a wire rack, and then begin layering and decorating. If not, gently wrap cakes in cling wrap tightly – be very careful as the layers will be quite thin and fragile. Place in fridge overnight. It is best to bake cakes the day before, or on the day of use. You could probably freeze them if you were really time poor, however, sometimes I find that cakes can taste a bit strange when they have been frozen!

Jaffa Ganache:
This is the same ganache I used for the Jaffa Swirl Macarons, however I just quadrupled it.
Place all ingredients in a medium saucepan and stir over a low heat until smooth. If using the next day, cover and refrigerate, then take out an hour or two before use. If using on the same day, cover and refrigerate for about 30 mins, or until ganache has slightly set. I probably made my ganache a little too late for when I needed the cake, so you can see in the pictures that it was still quite runny. I tried to make the best of it though, and exposed the colours of the cake by letting the ganache drip around the side. I originally wanted to cover the cake completely in ganache, but I think it still looked nice. Assembly:
Place the bottom cake on a large cake stand or a cake board. With a round-edged knife, spread a layer of ganache on the top, and layer with the second cake. Repeat the process, and cover the cake completely with the ganache. If the ganache is too hard, dip the knife in warm water – it will make it a lot easier to spread out.

You can decorate the cake however you like – you don’t even have to decorate it thought, if you don’t want to. You could use cachous, glitter, you could pipe swirls of ganche – anything you like! As you can see here, I went for choc-dipped orange segments with a tiny bit of gold glitter.

I have made Jaffa macarons probably close to 10 times, but have somehow never managed to get them up on here! They are definitely a hit with young and old, hence why have made them countless times! This time, however, I wanted to do something a little different. I have seen the swirly effect on macarons before, and always thought it would be really difficult to pull off, but surprisingly, it wasn’t too bad 🙂 I was really, really happy with how the colour turned out, and will definitely be giving this technique a go again! Also, apologies for the lack of quality photos – I have been having some camera issues, so iPhone it is for now!

Preheat oven to 170c (160c fan forced). Spray four oven trays with cooking oil spray baround the edges, and line with baking paper and set aside. Place almond meal and icing sugar in a large bowl, and sift together 3 times. Set aside, along with the 45g egg whites. Put 50g egg whites in a separate bowl. Heat caster sugar and water in a small saucepan, over a low-medium heat, until the sugar completely dissolves (if it slightly burns my tongue, it’s done!). If you do not want to burn your tongue, Zumbo suggests investing in a candy thermometer and heating the syrup until it reaches 118 degrees C (244 degrees F). If the syrup becomes thick and powdery in appearance, you will need to start again. This is because the sugar has been heated too much, too quickly, and instead of dissolving, it has cooked.

Begin beating the 50g egg whites with one hand, and with the other, stream the hot sugar syrup down the side of the bowl to create an italian meringue. Beat until stiff peaks form, the meringue should be thick and very glossy. If you want to add flavouring/colouring, now’s your moment. So add the cocoa now. Just lightly beat them into the meringue. Pour meringue into the almond meal, icing sugar and 45g egg whites mixture and mix roughly to combine. When combined, fold mixture together (one single stroke) until there are no air bubbles left. Make a spread across the top of the mixture, and it should disappear in about 20 seconds. Open your piping bag, and fold 1/4 of it down over itself. With a skewer or cake tester, spead 3 thick lines of orange colouring gel around the piping bag. 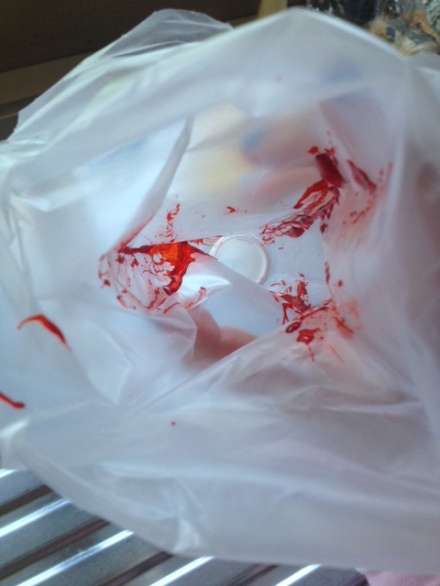 Spoon mixture into a piping bag fitted with a round nozzle. (If you don’t have a piping bag set, most supermarkets sell plastic ones, they are Multix brand, in an orange box and contain 5 piping bags with a few different nozzles, plus they’re only about $3. You should be able to find them in the baking aisle). Lock the bag by spinning the top around 4 times. Pipe 3-4cm rounds on the oven trays prepared earlier. Tap the bottom of the trays on the kitchen bench and let them sit for about half an hour, or until mixture is dry to the touch.

Place in oven and bake for 8 minutes. Turn tray around in the oven and bake for another 7 minutes. To test, pull a macaron off the baking paper. If it is stuck, keep cooking and checking regularly. Cool on trays for 5 minutes, then peel off and place on a wire rack. The mixture should make about 12 -15 large macarons, and about 25 smaller macarons. Macarons keep really well (about 5 days in the fridge) and some say that the longer they are refrigerated, the more the flavour is likely to develop. Macarons taste best when they are stored in the fridge, then brought down to room temperature to eat.

Place chocolate, cream and zest in a medium saucepan. Cook over a medium heat until chocolate is melted. Place in a heatproof bowl and let it cool completely before refrigerating. If using that day, ensure ganache is firm enough to pipe. If not, ganache may need 5-10 seconds in the microwave before using.

To assemble, match up likely macaron shells. Place ganache in a piping bag fitted with a round nozzle, and pipe small rounds onto a shell. Sandwich with other shell.

Despite these macarons being one of the tastiest, they are also one of the easiest flavours to make! They are great for macaron beginners because you don’t need any complicated ingredients or equipment – the hardest part is probably melting the chocolate – easy 😉