Wow. It’s so hard to believe that Easter is upon us already! Even though I have been eating the occasional hot cross bun in secret since January 1st when they are available at the supermarket, I guess the week before Easter is finally the socially acceptable time to eat one, two or twenty hot cross buns. So, here we are. And they’re not too bad even if I say so myself. I made a couple of batches of original and choc-chip buns a few years back and I promised myself I would try to make them each year for Easter as they were just so damn good! Although, last year, I substituted the real things for something almost as good, Hot Cross Macs. This year, I wanted to try making the buns again, with a bit of a different flavour 🙂 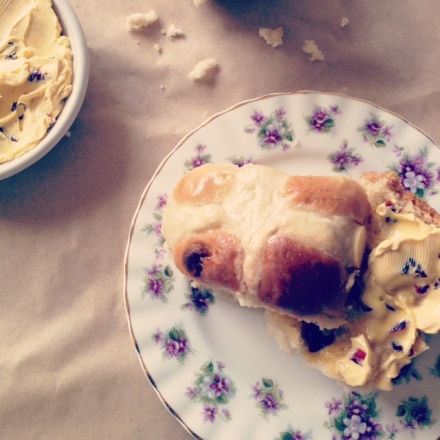 I found some really good chai tea from T2 in the cupboard, bursting with cardamom pods, cinnamon sticks and broken star anise. I knew then, I had to make my buns with this awesome chai. Mmm, and what to go with it? I didn’t want them to be too traditional, and since I was little, I have always been a loyal fan of the choc-chip variety (what kid hasn’t?!). White chocolate it was. I thought it would give the chai a bit of sweetness and provide the same great chunkiness as the choc-chip bun, and the white chocolate wouldn’t overpower the flavour of the chai like milk or dark chocolate would (I’m trying so hard not to sound like a wanker when I describe the flavour, lol).

Chai and White Chocolate Hot Cross Buns (adapted from Sasko flour):
For the chai tea:
Place the tea in a saucepan, with the water. Simmer on a low heat until the water colours, and the flavours are prominent (about 8 mins). If you need to, strain the tea, and place back in the saucepan once strained. Stir in vanilla, honey and milk, and set aside to cool slightly.

For the dough:
Sift flour into a bowl, rub in the butter with your fingers, and stir in the cinnamon, salt and sugar. Measure out 280ml of the chai tea mixture, and lightly mix in the yeast. When it begins to foam (you only need a few bubbles, don’t freak out if it doesn’t look like a bubble bath – I have made this mistake before), add to the flour mixture, along with the lightly beaten egg. Mix with hands until a dough if formed. If the dough is too crumbly, add a tiny bit of water. Oil a large bowl, and place dough inside. Put a tea towel over the top of the bowl, and put in a warm place for about an hour, or until the dough has doubled in size. I put my dough in a sunroom and it was perfect. You could also put it beside a window which is getting some sunshine.

Preheat the oven to 200c. Once the dough has doubled, remove from the bowl and knead with hands on a clean surface until soft and springy. Add white chocolate in 2 batches and knead well. Shape the dough into 12 even balls, and place in an oiled or greased tray. Leave in a warm place to double in size once again, for about 30-45 minutes. Use the 100g of flour and some water to make a paste. Keep adding small amounts of water until desired consistency is reached. Remember you can put more water in, but you can’t take it out! You want the paste to be rough but not stodgy. Place flour paste in a piping bag fitted with a medium sized round nozzle (the ones you get with the Multix ones are perfect). Pipe crosses on the buns, and place in preheated oven for 12-15 minutes. Remove from oven and let cool in tray.

To make the glaze, use 100ml of chai tea mixture and 1/2 cup caster sugar, and place in a saucepan. Simmer on a medium heat until it comes to the boil. Remove from heat, and brush buns with a pastry brush. I needed 2 coats on mine for them to be glossy enough.

Cranberry Butter:
Place all ingredients in a small bowl and stir until combined. Spread on warm hot cross buns.

Hot cross buns are heaps of fun to make. They are not difficult, but you definitely need to read the recipe beforehand. The only other thing is, you do need a bit of time, but I promise they are worth it! Don’t feel confined to making buns with the original flavours if you don’t wish to, mix it up with different fruits such as berries and citrus, and sweets such as different types of chocolates, caramel, nutella or jam.