Happy Easter everyone! I seriously cannot believe it is this time of the year already. It only seems like yesterday that Easter Eggs were going on sale at the end of December! I have been wanting to create a Hot Cross Bun inspired macaron for a while now, but have not had the time…so here we finally are! I do love a good Hot Cross Bun, however I am pretty partial to the Choc Chip ones that everybody seems to sell these days, too 😛 I was really happy with how these babies turned out, the flavour of the spices isn’t too intense, and the candied peel adds a traditional hot cross bun element and a fruity kick!

Preheat oven to 170c (160c fan forced). Spray four oven trays with cooking oil spray around the edges, and line with baking paper and set aside. Place almond meal and icing sugar in a large bowl, and sift together 3 times. Set aside, along with the 45g egg whites. Put 50g egg whites in a separate bowl. Heat caster sugar and water in a small saucepan until it is hot and syrupy (if it slightly burns my tongue, it’s done!). If white, thick, powdery bubbles begin to form around the edges, start again!

Begin beating the 50g egg whites with one hand, and with the other, stream the hot sugar syrup down the side of the bowl to create an italian meringue. Beat until stiff peaks form, the meringue should be thick and very glossy. If you want to add flavouring/colouring, now’s your moment. So add the cocoa now. Just lightly beat them into the meringue. Pour meringue into the almond meal, icing sugar and 45g egg whites mixture and mix roughly to combine. When combined, fold mixture together (one single stroke) until there are no air bubbles left. Make a spread across the top of the mixture, and it should disappear in about 20 seconds. Spoon mixture into a piping bag fitted with a round nozzle. (If you don’t have a piping bag set, most supermarkets sell plastic ones, they are Multix brand, in an orange box and contain 5 piping bags with a few different nozzles, plus they’re only about $3. You should be able to find them in the baking aisle). Lock the bag by spinning the top around 4 times. Pipe 3-4cm rounds on the oven trays prepared earlier. Gently tap the bottom of the trays and let them sit for about half an hour, or until mixture is dry to the touch.

Place in oven and bake for 8 minutes. Turn tray around in the oven and bake for another 7 minutes. To test, pull a macaron off the baking paper. If it is stuck, keep cooking and checking regularly. Cool on trays for 5 minutes, then peel off and place on a wire rack. The mixture should make about 12 large macarons, and about 25 smaller macarons.

Cover orange peel in a small saucepan with plenty of cold water. Bring to the boil and cook for 5 minutes, then drain well. Repeat this process. Once peel has been drained for the second time, place again in saucepan, with the water and the sugar. Cook over a low heat until the sugar dissolves. Turn up the heat and bring to the boil, and cook, sitrring occasionally for 5 minutes, or until the peel is tender and translucent. Transfer peel to a wire rack with a fork, and cool completely.

Beat butter until pale and creamy (2-4 minutes). Gradually add the icing sugar and spices, you can add the sugar to taste as well if you like. Sometimes I don’t add the whole 2 cups of sugar. Buttercream should be slightly brown from the spices, and if you follow my quantities, it will be fairly subtle.

Icing for the crosses:

Combine sugar and water until a thick paste is formed. Spoon in a small snap lock bag, and cut off a tiny part of one of the bottom corners. Gently pipe 2 straight lines to form a cross on top of one macaron shell of each biscuit. 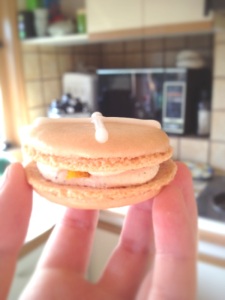 Pair up matching macaron shell combinations. Spoon buttercream into a piping bag fitted with a round nozzle. Gently pipe half a teaspoon of buttercream onto a shell, and top with one or two pieces of candied orange peel. 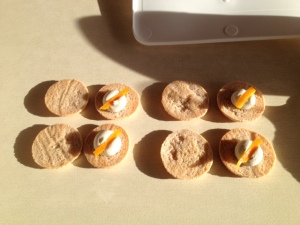 Pipe another half teaspoon on top of the peel, and sandwhich with another shell.

These are seiruously yummy, and a great alternative if you find hot cross buns too intense in flavour, which many can be. Enjoy, and Happy Easter!