It seems I’m developing a bit of habit of combining chocolate and fruit lately. This macaron flavour was inspired, or recreated, I should say, from my visit to Paris last year, where I had the most amazing macarons, unsurprisingly. Pierre Herme had an amazing Chocolate Passionfruit macaron, and the middle was the yummiest combination of creamy and bitter chocolate combined with that zingy and sweet hit of passionfruit, it was delicious. I did my best to try and recreate this wonderful moment, and I think I did quite well, but of course, nothing will ever compare to Pierre Herme! 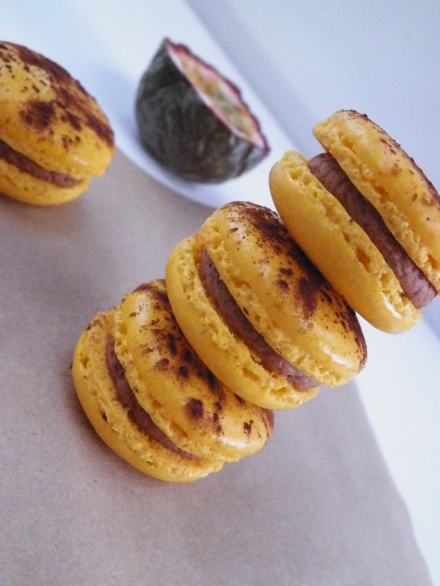 The ganache didn’t go quite as I hoped it would, as I think I made it too late. Ganache can take a long time to set properly. Next time I would probably leave it overnight. Then, I put too much liquid into the butter, and it split. Luckily, that was easily fixed, with more butter. But there’s not much that butter can’t fix. The flavour of the ganache was very full on when I made it. It was very sour and the chocolate was very bitter – I used 75% cocoa, next time I would probably use really good quality milk or a regular dark chocolate. You couldn’t really distinguish the chocolate from the passionfruit, it was too strong. However, as macarons tend to do, the flavour did develop, and they were much nicer the next day. Also, I’m super happy with these shells! One giant positive of colder weather = less humidity, prettier macs 🙂 Oh, and FYI, I have slightly changed my macaron recipe. It’s only the cooking times, but I’ve found the shells to be sturdier and chubbier since I’ve made the change.

Begin beating the 50g egg whites with one hand, and with the other, stream the hot sugar syrup down the side of the bowl to create an italian meringue. Beat until stiff peaks form, the meringue should be thick and very glossy. If you want to add flavouring/colouring, now’s your moment. So add the colouring now. Just lightly beat it into the meringue. Pour meringue into the almond meal, icing sugar and 45g egg whites mixture and mix roughly to combine. When combined, fold mixture together (one single stroke) until there are no air bubbles left. Make a spread across the top of the mixture, and it should disappear in about 20 seconds. Spoon mixture into a piping bag fitted with a round nozzle. (If you don’t have a piping bag set, most supermarkets sell plastic ones, they are Multix brand, in an orange box and contain 5 piping bags with a few different nozzles, plus they’re only about $3. You should be able to find them in the baking aisle). Lock the bag by spinning the top around 4 times. Pipe 3-4cm rounds on the oven trays prepared earlier. Tap the bottom of the trays on the kitchen bench and let them sit for about half an hour, or until mixture is dry to the touch. Meanwhile, preheat the oven to 135c, fan forced.

Place in oven and bake for 8 minutes. Turn trays around, and bake for another 9 minutes. To check if shells are cooked, gently lift one off the baking paper. If it peels of easily, they are done, if not, keep checking at 2 minute intervals. Cool on trays for 5 minutes, then peel off and place on a wire rack. The mixture should make about 12 -15 large macarons, and about 25 smaller macarons. Macarons keep really well (about 5 days in the fridge) and some say that the longer they are refrigerated, the more the flavour is likely to develop. Macarons taste best when they are stored in the fridge, then brought down to room temperature to eat. 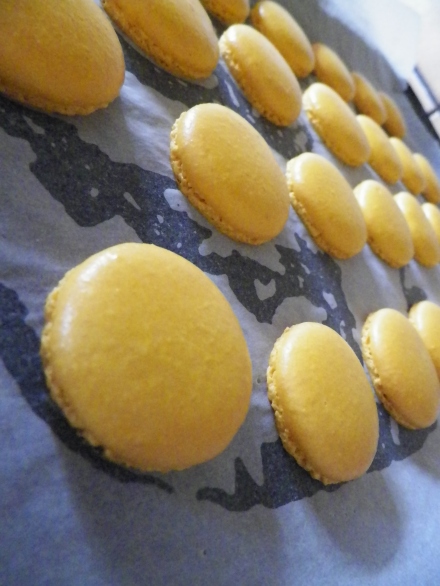 Place all ingredients in a medium saucepan, and stir over a low-medium heat until smooth. Pour into bowl and refrigerate. For best results, make ganache the day before serving. Ganache should be of a pipe-able consistency. OPTIONAL – if you like your ganache quite creamy, feel free to beat up 70g butter and add to ganache.

Pair up likely macaron shells. Spoon ganache into a piping bag fitted with a wide round nozzle. Pipe rounds onto shells, and sandwich with another. You can dust with cocoa, if you like. Store macarons in an airtight container, in the fridge, and bring down to room temperature to eat.