Before I say anything else, I believe red velvet cupcakes are the world’s greatest invention. Ever. I. Love. Them. So. Much. I’m not sure exactly what it is, maybe the cream cheese frosting or the fact that the cake itself isn’t too sweet, or the combination of the two. Whatever it is, I love it! 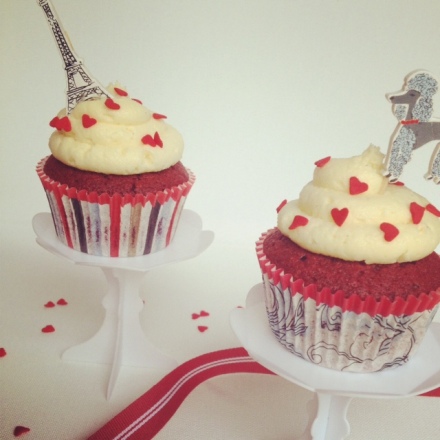 It was my best friend’s birthday, and she loves all things Paris-y, so when I saw this kit with the cases and the little toothpicks, I knew exactly what I was going to use them for! I have tried a few red velvet recipes in my time, including the one for the giant cupcake, but I think this is the best one I have come across. It was delish-i-ohso.

Preheat the oven to 175c (350F). Line two cupcake trays with cases. Place the flour, cocoa and salt together and mix, then set aside. With an electric whisk or a stand mixer, beat together the sugar and the oil until combined. Add eggs one at a time, beating until each is fully mixed in. Beat in vanilla and red food colouring gel.

Reduce the speed to low and add the flour mixture in 3 batches, and the buttermilk in 2 (3 dry, 2 wet additions – begin and end with dry). Whisk well after each addition. In a separate small bowl, combine the baking soda and vinegar – it will foam. Add mixture to the batter, and whisk all together for about 10 minutes. Fill each cupcake case about 3/4 of the way. Place in oven for 10 mins, then turn tray around and bake for another 10-12 minutes, or until a skewer comes out clean. Cool in tins for 5 mins, then transfer to wire rack. Makes approx. 22 large cupcakes.

Beat the butter and cream cheese together until pale and creamy, about 2-3 minutes. Gradually add the icing sugar to taste, I used just over 2 cups, but you might want more if you like it sweeter – it’s really upto you 🙂 Beat in the vanilla. 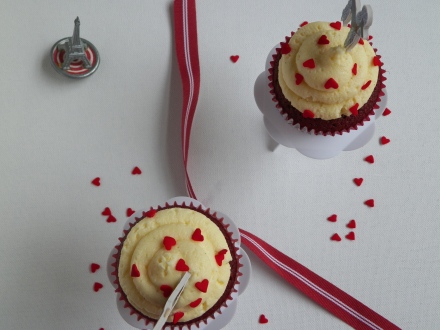 Fill  piping bag fitted with a round nozzle and pipe a swirl on each cupcake. Decorate however you like!

I was originally a little worried about the amount of oil in this recipe, because you could really taste it in the batter before it was cooked. However, these cakes were so fluffy and moist – seriously one of the best I’ve ever tried. If you’re a fan of red velvet, definitely give these a go…you will not be disappointed 🙂 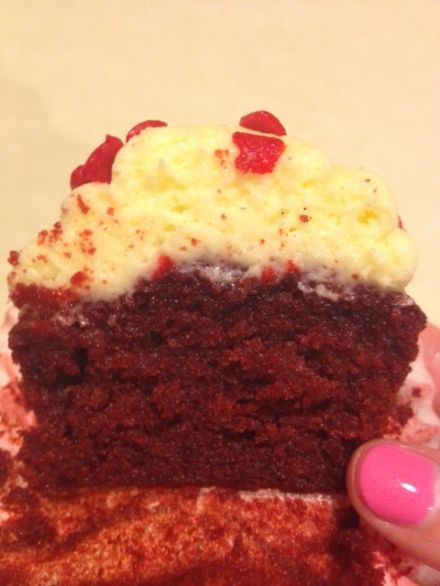 Have a great weekend and happy baking! X