I LOVE a fruit tingle. Both the cocktail, and the lolly. But the fizzy sherbet lolly especially. Fruit Tingle’s (which are similar to Bottle Caps/SweeTarts/Refreshers) have been one of my favourite lollies since I can remember – I love the sourness and the sweetness together, and would often chuck a whole small packet in my mouth at once, quite happily. Fruit Tingles are nostalgic for me – I remember I used to have competitions with my friends to see how many multi-coloured lollies we would get, and we would make a wish with each multi-coloured fruit tingle we got in our packet. A few years ago, thanks to Raspberri Cupcake’s Orange Cake with Fruit Tingles Icing, I discovered the joy of fruit tingles and butter combined. It was pretty magical and life changing. And so, I present Fruit Tingle Macarons with Popping Candy. 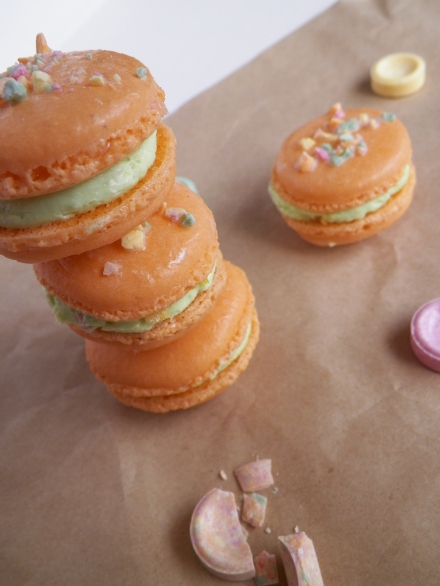 I threw in another favourite candy of mine from the 90s – Wizz Fizz. I’m sure it was a worldwide phenomenon possibly under other names in other countries, but if you have been completely deprived, and have not been introduced to Wizz Fizz, it is just sherbet in a small bag with a little coloured spoon. Well, I shouldn’t say it’s just sherbet. It’s amazing tingle soury goodness that everybody should experience at least once, it’s good fun. And I guarantee once you have finished the bag you will be covered in a white powder. The good type of white power – Wizz Fizz 😉

Begin beating the 50g egg whites with one hand, and with the other, stream the hot sugar syrup down the side of the bowl to create an italian meringue. Beat until stiff peaks form, the meringue should be thick and very glossy. If you want to add flavouring/colouring, now’s your moment. So add the colouring now. Just lightly beat them into the meringue. Pour meringue into the almond meal, icing sugar and 45g egg whites mixture and mix roughly to combine. When combined, fold mixture together (one single stroke) until there are no air bubbles left. Make a spread across the top of the mixture, and it should disappear in about 20 seconds. Spoon mixture into a piping bag fitted with a round nozzle. (If you don’t have a piping bag set, most supermarkets sell plastic ones, they are Multix brand, in an orange box and contain 5 piping bags with a few different nozzles, plus they’re only about $3. You should be able to find them in the baking aisle). Lock the bag by spinning the top around 4 times. Pipe 3-4cm rounds on the oven trays prepared earlier. Tap the bottom of the trays on the kitchen bench and let them sit for about half an hour, or until mixture is dry to the touch. Meanwhile, preheat the oven to 145c (135c fan forced).

Melt the caster sugar and water in a small saucepan until completely dissolved. With a pastry brush, gently brush the macaron shells (about 5 at a time because they will dry) and place a small amount of fruit tingles on top of each shell. Leave on wire rack to dry. 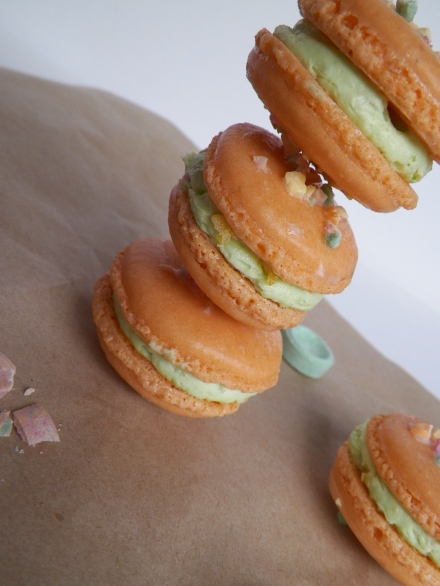 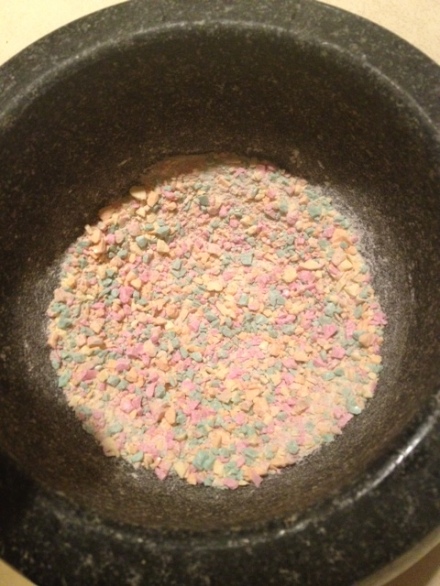 Beat butter until pale and creamy. Gradually add icing sugar mixture. Beat in Wizz Fizz and Fruit Tingles until well combined. Beat in colouring gel. You can store buttercream overnight at room temperature, but it is best used immediately. To fill the macarons, spoon buttercream into a piping bag fitted with a large, round nozzle (make sure it is extra large so the chunks of fruit tingles won’t get stuck). Pipe 3/4 teaspoon of buttercream on shell, sprinkle with popping candy, and sandwich with another shell. Store macarons in the fridge, but bring them down to room temperature to eat. Enjoy! 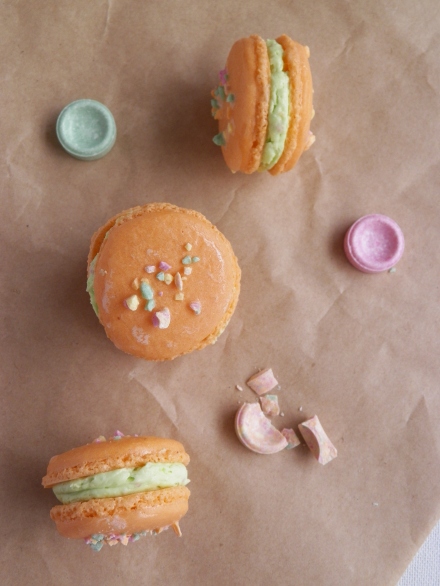