I know Australia Day was last week, but I hardly had any time to do anything for the occasion then, so here we are! I had a few ideas floating around, and I wanted to do something a little bit different, but still reflecting an Aussie theme obviously. I hadn’t made macarons in a couple of weeks, so I decided to try the vegemite macarons from Zumbo’s crazy cookbook! (page 27 for those who have it). FYI, if you have never heard of Zumbo, he is basically the Aussie version of Willy Wonka, and the king of the macaron. Check out his amazing creations and stores here.

I thought making the macarons bright green and gold would look fantastic, and I was so happy with them, and their flavour, too. I’m not a huge, huge fan of Vegemite at the best of times, but the filling is quite subtle, especially when coupled with the sweetness of the macaron shell itself. I was going to call it Vegemite Toast, because the ganache has breadcrumbs in it, however they are not as pronounced when sandwiched between the macaron shells. Once again, if you don’t know what Vegemite is, well, you’re not really missing out on much! It is an Australian yeast spread, which has an extremely concentrated and intense savoury/soury flavour, it’s a bit hard to explain exactly what it tastes like. I always see Americans on TV trying HUGE spoons of Vegemite, and clearly hating it. A tip – do not have too much, and have it with a lot of butter, on toast, and it isn’t too bad at all! Anyway, getting back on track…

I also decided to make lamington macarons, too, another traditional Aussie treat consisting of sponge cake dipped in chocolate, covered in coconut and filled with raspberry jam. Unfortunately, I think I may have added a bit too much cocoa to the meringue mixture, and most of the shells came out looking more like pancakes 😦 I did manage to salvage a couple of half-decent ones for a photo, but they pretty much crumbled straight after. On the bright side, however, they tasted AMAZING. Definitely one to give a go again.

Macarons: (obviously I made 2 separate batches for this recipe)

Preheat oven to 170c (160c fan forced). Line three oven trays with baking paper and set aside. Place almond meal and icing sugar in a large bowl, and sift together 3 times. Set aside, along with the 45g egg whites. Put 50g egg whites in a separate bowl. Heat caster sugar and water in a small saucepan until it is hot and syrupy (if it slightly burns my tongue, it’s done!). If white, powdery bubbles begin to form around the edges, start again!

Begin beating the 50g egg whites with one hand, and with the other, stream the hot sugar syrup down the side of the bowl to create an italian meringue. Beat until stiff peaks form, the meringue should be thick and very glossy. If you want to add colouring/flavouring, now’s your moment. Just lightly beat them into the meringue. Pour meringue into the almond meal, icing sugar and 45g egg whites mixture and mix roughly to combine. When combined, fold mixture together (one single stroke) until there are no air bubbles left. Make a spread across the top of the mixture, and it should disappear in about 20 seconds. Spoon mixture into a piping bag fitted with a round nozzle. (If you don’t have a piping bag set, most supermarkets sell plastic ones, they are Multix brand, in an orange box and contain 5 piping bags with a few different nozzles, plus they’re only about $3. You should be able to find them in the baking aisle). Lock the bag by spinning the top around 4 times. Pipe 3-4cm rounds on the oven trays prepared earlier. Gently tap the bottom of the trays and let them sit for about half an hour, or until mixture is dry to the touch.

Place in oven and bake for 8 minutes. Turn tray around in the oven and bake for another 7 minutes. To test, pull a macaron off the baking paper. If it is stuck, keep cooking and checking regularly. Cool on trays for 5 minutes, then peel off and place on a wire rack. The mixture should make about 12 large macarons, and about 25 smaller macarons. 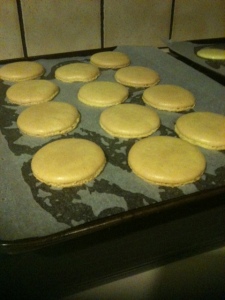 Lamington – Add 1 tsp good quality cocoa to meringue mixture, before combined with almond meal, icing sugar and 45g egg whites. After the macarons have been piped onto the tray, sprinkle with shredded coconut. To make the ganache, melt 100g good quality dark chocolate with half a cup of thickened (whipping) cream, and half a cup of shredded coconut until smooth. Spoon 2/3 tsp of ganache onto 1 macaron shell, spoon 1/2 tsp of raspberry jam on top of the ganache, and sandwich with another shell.

Green and Gold Vegemite – For the shells, add 1/2 tsp of Wilton’s colouring gel in Lemon Yellow (I do think that supermarket food colouring liquid will change the consistency of the shells, as you would need a lot to achieve such a bright yellow), to the meringue mixture. For the ganache, you will need 95g of thickened (whipping) cream, 112g good quality white chocolate, and 20g vegemite (you could probably use Marmite if Vegemite is not available), 25g breadcrumbs and 62g butter, softened – not melted. Put the cream in a saucepan, over a medium heat and bring to the boil. Have the chocolate and vegemite ready in a bowl. Pour the hot cream over the choc/vegemite mixture and leave for 2 minutes. Stir until mixture is smooth, and stir in the breadcrumbs. When the mixture has cooled down a bit, blitz in the butter with a stick mixer (if you do not have a stick mixer, make sure your butter is really, really soft and just whisk it in while it is still warm until smooth. Add green colouring (again, I used Wilton’s gel). Cool ganache until solid enough to pipe. Fill a piping bag fitted with around nozzle. Pipe approx. 1 tsp on a shell, then sandwich with another. (I did half Zumbo’s recipe here).

Please don’t be put of making these by my explanation of Vegemite, because when combined with white chocolate and butter – it tastes pretty great!

Check out MACTWEETS Mac Attack Challenge – an awsome blog that honours the amazingly delish macaron every month! For March, it will be Macaron Day (on the 20th). I have entered these little babies in the challenge…go you happy little vegemites!

(P.S. I will be overseas for 3 weeks now, so stay tuned for a post after then!)