This is now the second time I have made these, and round two definitely didn’t disappoint. I LOVED redskins when I was little, and when I saw this flavour popping up around local markets and food blogs, I just had to give them a go. They are ahhhhh-mazing! A winner with the crowds, too 🙂 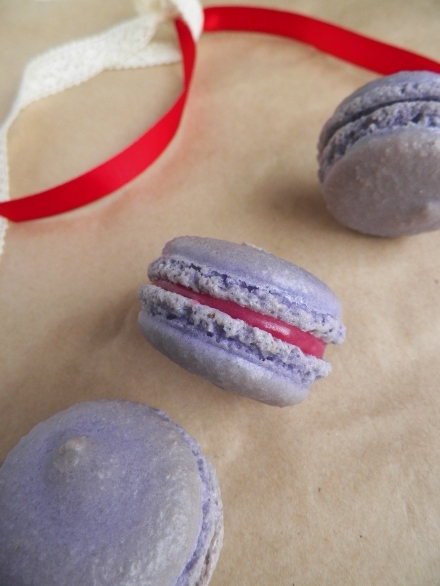 Another awesome thing about these macarons, is that the ganache is super easy to make. You just melt down some redskin lollies, cream and add in the white chocolate and you’re done! Chocolatey, creamy, raspberry gooey deliciousness 😉 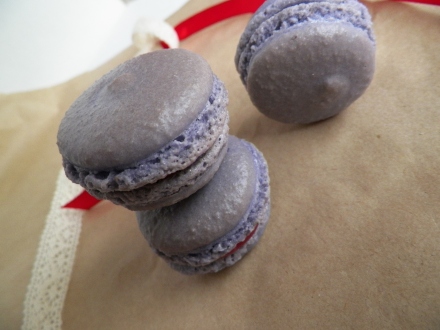 Begin beating the 50g egg whites with one hand, and with the other, stream the hot sugar syrup down the side of the bowl to create an italian meringue. Beat until stiff peaks form, the meringue should be thick and very glossy. If you want to add flavouring/colouring, now’s your moment. So add the cocoa now. Just lightly beat them into the meringue. Pour meringue into the almond meal, icing sugar and 45g egg whites mixture and mix roughly to combine. When combined, fold mixture together (one single stroke) until there are no air bubbles left. Make a spread across the top of the mixture, and it should disappear in about 20 seconds. Spoon mixture into a piping bag fitted with a round nozzle. (If you don’t have a piping bag set, most supermarkets sell plastic ones, they are Multix brand, in an orange box and contain 5 piping bags with a few different nozzles, plus they’re only about $3. You should be able to find them in the baking aisle). Lock the bag by spinning the top around 4 times. Pipe 3-4cm rounds on the oven trays prepared earlier. Tap the bottom of the trays on the kitchen bench and let them sit for about half an hour, or until mixture is dry to the touch. Meanwhile, preheat the oven to 145c (135c fan forced). 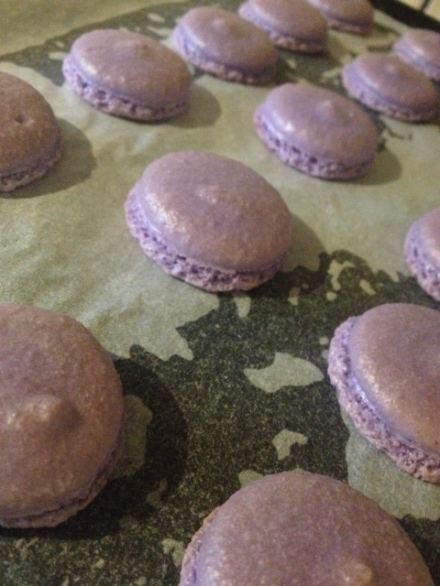 Redskin Ganache: (I think the recipe is orginially by Adriano Zumbo, but I can’t find it for the life of me! I saw a random photo on my Mum’s Facebook page – have no idea whose it was, with all the ingredients laid out, and made my own measurements. Compliments to to whoever’s photo it was…oops!)

Place the redskins and the cream in a small saucepan, over a low-medium heat, stirring with a metal spoon until the redskins are completely melted – this should take up to 5 minutes. Add in the white chocolate, and stir until everything is combined well and melted. Leave ganache at room temperature until firm enough to pipe.
To assemble, pair up likely macarons shells, and spoon the ganache into a piping bag fitted with a round nozzle. Pipe small rounds on one shell, and sandwich with the other. TIP – don’t put too much ganache onto the shells, the ganache is quite runny and sticky, and if you have too much filling the shells will slip and slide all over the place! 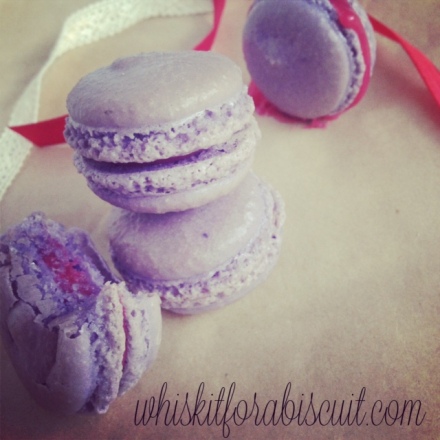 FYI – This will be my last recipe post for a while, as whiskitforabiscuit will temporarily turn into a bit of a travel blog! I am off to Europe for 3 months, so I will do my best to post regularly and will attempt to focus it around food, of course…but that shouldn’t be too hard!
Follow me on Instagram – GemmaAsh!