I think I can safely say that I have put on about 2kg’s this week. And the peanut butter filling used for these macarons is the sole reason for this! If you are a peanut butter fiend, you will love these, and I’m seriously surprised there was any filling left for the macarons 😛 I’ve been having a bit of bad luck with macarons lately, many of the shells in this batch cracked in the oven, which makes me really upset and then, in a fit of self-pity, I ended up eating the majority of all the cracked shells! 😦 I think the Australian summer might have something to do with it, as humidity practically destroys macaron shells 😦 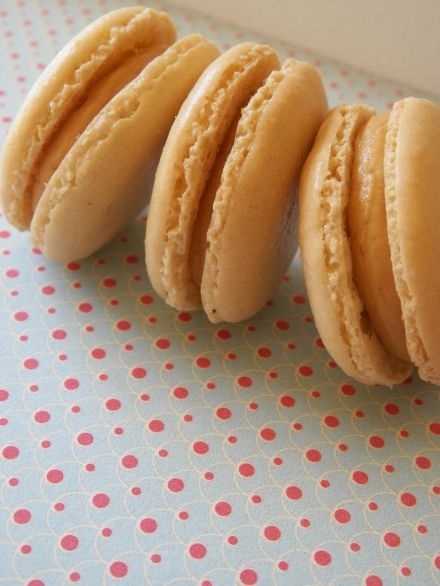 I used a Donna Hay recipe for the peanut butter filling, and as I already mentioned, it certainly did not let me down! It’s really easy to make, and it also keeps very well and is versatile. I can’t wait to use it on cupcakes and in tarts. And of course, to eat it straight from the bowl 😉 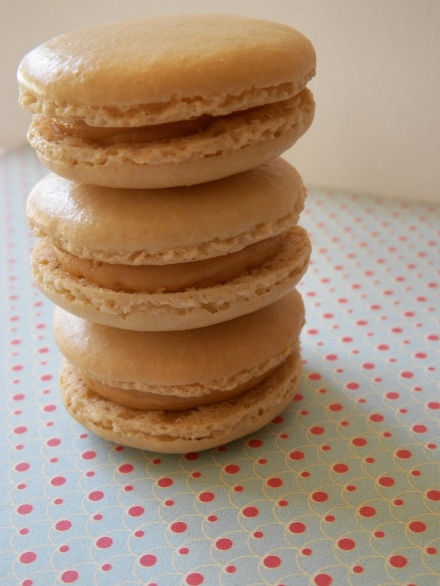 Preheat oven to 160 (150c fan forced). Spray four oven trays with cooking oil spray baround the edges, and line with baking paper and set aside. Place almond meal and icing sugar in a large bowl, and sift together 3 times. Set aside, along with the 45g egg whites. Put 50g egg whites in a separate bowl. Heat caster sugar and water in a small saucepan, over a low-medium heat, until the sugar completely dissolves (if it slightly burns my tongue, it’s done!). If you do not want to burn your tongue, Zumbo suggests investing in a candy thermometer and heating the syrup until it reaches 118 degrees C (244 degrees F). If the syrup becomes thick and powdery in appearance, you will need to start again. This is because the sugar has been heated too much, too quickly, and instead of dissolving, it has cooked.

Begin beating the 50g egg whites with one hand, and with the other, stream the hot sugar syrup down the side of the bowl to create an italian meringue. Beat until stiff peaks form, the meringue should be thick and very glossy. If you want to add flavouring/colouring, now’s your moment. So add the colouring now. Just lightly beat them into the meringue. Pour meringue into the almond meal, icing sugar and 45g egg whites mixture and mix roughly to combine. When combined, fold mixture together (one single stroke) until there are no air bubbles left. Make a spread across the top of the mixture, and it should disappear in about 20 seconds. Spoon mixture into a piping bag fitted with a round nozzle. (If you don’t have a piping bag set, most supermarkets sell plastic ones, they are Multix brand, in an orange box and contain 5 piping bags with a few different nozzles, plus they’re only about $3. You should be able to find them in the baking aisle). Lock the bag by spinning the top around 4 times. Pipe 3-4cm rounds on the oven trays prepared earlier. Tap the bottom of the trays on the kitchen bench and let them sit for about half an hour, or until mixture is dry to the touch.

Place in oven and bake for 7minutes. Turn tray around in the oven and bake for another 5 inutes. To test, pull a macaron off the baking paper. If it is stuck, keep cooking and checking regularly. Cool on trays for 5 minutes, then peel off and place on a wire rack. The mixture should make about 12 -15 large macarons, and about 25 smaller macarons. Macarons keep really well (about 5 days in the fridge) and some say that the longer they are refrigerated, the more the flavour is likely to develop. Macarons taste best when they are stored in the fridge, then brought down to room temperature to eat.

Place sugar peanut butter, butter and vanilla in a bowl, and beat until light and fluffy (on high for about 5 minutes). Add the cream slowly and beat for another 2 minutes. If not using straight away, cover and refrigerate. To assemble, place the peanut butter filling in a piping bag fitted with a round nozzle. Pipe 3/4 teaspoon on a macaron shell, then sandwich with another. Refrigerate until you need to serve. 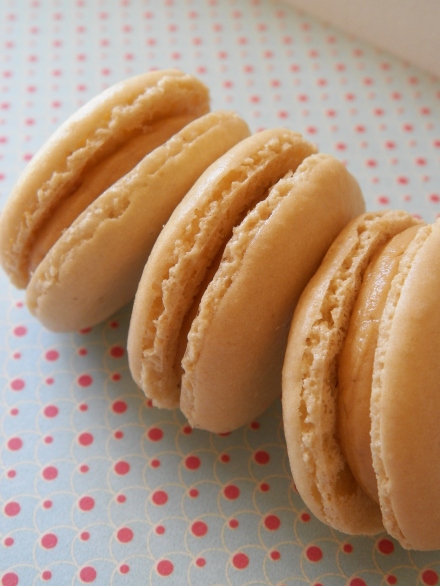 One thought on “Peanut Butter Macarons”

Error: Twitter did not respond. Please wait a few minutes and refresh this page.