Salt and Vinegar has always been my favourite potato chip/crisp flavour. When I saw these Salt and Vinegar Macarons in Zumbo’s crazy book, I just had to make them, especially after the success of the Vegemite Macarons! 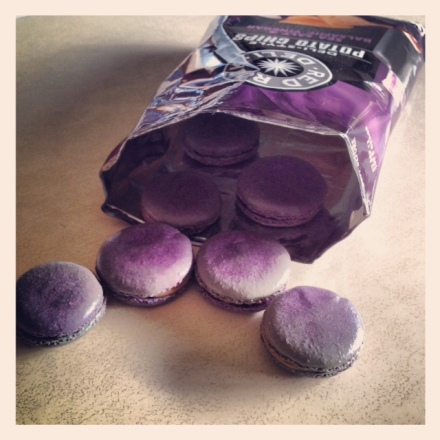 Similar to the Vegemite Macarons, the ganache was subtle however you could really taste the balsamic vinegar in the background in addition to the kick of salt. It was a great balance, Zumbo really is a genius!  These were not my best shells overall, it was quite weird, some turned out perfectly and some were cracked all over :S When I come to think of it though, it is the second time this has happened in the past few months, with the last time being when I also added quite a lot of food colouring. May have to watch that…

I really love using flavours and products that I grew up with in the nineties, such as Nesquik and Nutella and turning them into something different, such as a macaron, that everyone can enjoy and can readily make themselves if they wish to.

I also made these macarons for the Mactweets Challenge #30 – ‘School’s Out.‘ This theme was created to encourage people to make macarons that reminded them of their summer holidays. I thought this was a great theme, as there are so many beautiful summery flavours you could use such as tropical fruits, cocktail inspirations or even something along the lines of a soft drink/soda. So, although it is not Summer here in Australia, and is school in still ‘in’ (we have our Summer holidays over December/January when Summer falls), and it is absolutely freezing here in drizzly Melbourne, I still really wanted to make a kind-of summery mac.

Salt and Vinegar reminds me of Summer at the beach – eating hot chips lathered with vinegar and spinkled with salt on a balmy night. Yum!

Preheat oven to 170c (160c fan forced). Spray four oven trays with cooking oil spray around the edges, and line with baking paper and set aside. Place almond meal and icing sugar in a large bowl, and sift together 3 times. Set aside, along with the 45g egg whites. Put 50g egg whites in a separate bowl. Heat caster sugar and water in a small saucepan until it is hot and syrupy (if it slightly burns my tongue, it’s done!). If white, thick, powdery bubbles begin to form around the edges, start again!

Begin beating the 50g egg whites with one hand, and with the other, stream the hot sugar syrup down the side of the bowl to create an italian meringue. Beat until stiff peaks form, the meringue should be thick and very glossy. If you want to add flavouring/colouring, now’s your moment. So add the colouring now. Just lightly beat them into the meringue. Pour meringue into the almond meal, icing sugar and 45g egg whites mixture and mix roughly to combine. When combined, fold mixture together (one single stroke) until there are no air bubbles left. Make a spread across the top of the mixture, and it should disappear in about 20 seconds. Spoon mixture into a piping bag fitted with a round nozzle. (If you don’t have a piping bag set, most supermarkets sell plastic ones, they are Multix brand, in an orange box and contain 5 piping bags with a few different nozzles, plus they’re only about $3. You should be able to find them in the baking aisle). Lock the bag by spinning the top around 4 times. Pipe 3-4cm rounds on the oven trays prepared earlier. Gently tap the bottom of the trays and let them sit for about half an hour, or until mixture is dry to the touch. 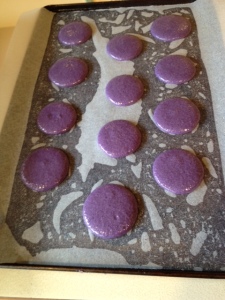 Place in oven and bake for 7 minutes. Turn tray around in the oven and bake for another 7 minutes. To test, pull a macaron off the baking paper. If it is stuck, keep cooking and checking regularly. Cool on trays for 5 minutes, then peel off and place on a wire rack. The mixture should make about 12 -15 large macarons, and about 25 smaller macarons. Macarons keep really well (up to 5 days in the fridge) and some say that the longer they are refrigerated, the more the flavour is likely to develop. Macarons taste best when they are stored in the fridge, then brought down to room temperature to eat.

Salt and Vinegar Ganache: (page 39 in Zumbo’s cookbook – I have halved the recipe from the book)

Place chocolate in a bowl. Place the cream in a saucepan over a medium heat until it comes to the boil. Pour hot cream over chocolate and set aside for 2 minutes. Stir until smooth. Stir in balsamic vinegar and fold in salt. Cool in fridge until firm enough to pipe.

Pair up identical macaron shells. Fit a medium sized piping bag with a round nozzle, and fill with the ganache. Pipe about half a teaspoon of ganache on a shell, and sandwich with the other half.

Don’t be afraid to try some new flavours, you will be surprised at what random flavour combinations will work! (Eg. Salt and Vinegar and White Choc!) X

9 thoughts on “Salt and Vinegar Macarons”