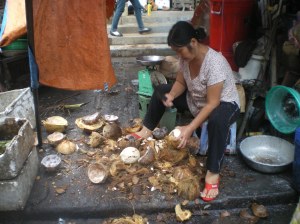 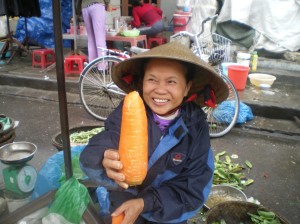 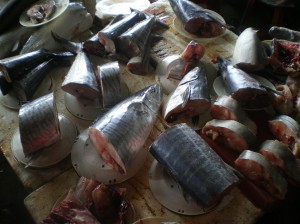 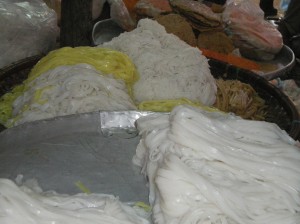 These photos above are from a cooking class I did in Hoi An. We went to the Hoi An fresh food market in the morning, and collected all the ingredients for the dishes we would make. The market was a crazy place, so many people, and so much food. It was great to see all of the Vietnamese exotic fruits, vegies and herbs all together in one place, and to learn about them all and where abouts they come from. The fish market was amazing, there was even a hammerhead shark just lying on the table for sale! You really knew that the seafood was fresh because the whole area didn’t smell fishy at all. 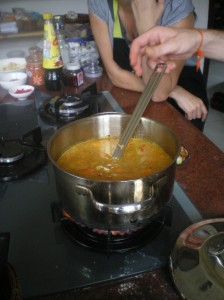 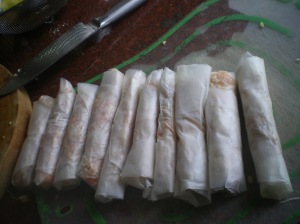 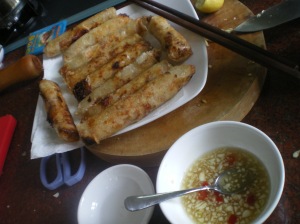 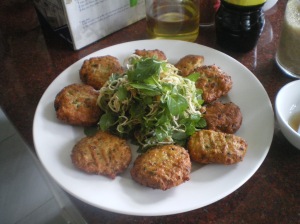 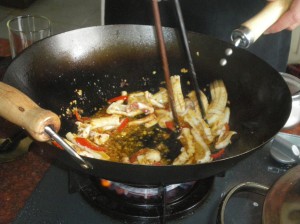 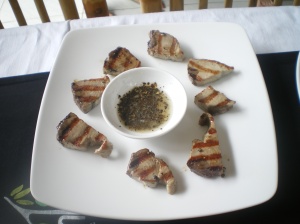 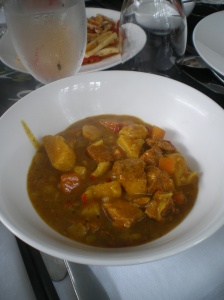 After the market, we went back to the instructor’s home to cook. There were three of us in the class, and we each chose a dish from an extensive list of Vietnamese cuisine. This class was definitely one of the highlights of the trip, and I thoroughly recommend Van from Green Bamboo Cooking School if you’re ever in Hoi An (check it out on Trip Advisor). I chose prawn and pork fried spring rolls, as spring rolls are my absolute weakness, and I wanted to learn how to make them properly. The other dishes that were chosen were a coconut chicken curry and chicken, lemongrass and shallot rissoles. We also cooked some fresh squid, and seared some fresh tuna from the market.

I was really happy with how my spring rolls turned out. They were really crispy, and went perfectly with the dipping sauce we made. The sauce was really simple, just lemon juice, a heap of garlic, and a touch of chilli. However, you can add as much or as little garlic and chilli as you like, and you can also use lime juice, which I actually liked a bit better than the lemon juice. When I make the spring rolls myself though, I think I would actually leave out the pork and the prawn. Whilst they were beautiful, I think the prawns especially got a bit lost in the pork and the vegies. The prawns were amazing, so fresh you could actually see right through them, and as I was peeling them they were still flopping around which really freaked me out!! Unfortunately, I don’t think the spring rolls showcased the prawns enough.

The coconut chicken curry was sooo good! We actually used the coconut water from the market which made the flavour really prominent. Yum! I seared the tuna in the above picture, and it was really, really good. I had never tried fresh tuna before, and safe to say I won’t be going back to the canned variety! We used the salt, pepper and lemon juice mixture that I mentioned earlier, and it went perfectly with the seared tuna. Can’t wait to try that one again!

Last but not least, I have to showcase the best cocktail I had in Vietnam – espresso martini (Vietnamese style). I am by no means a coffee drinker, but this cocktail was to die for! There is something a bit different about Vietnamese coffee, I think it is a bit sweeter, and nowhere near as bitter as some of the coffee you get in Australia. And only $4! Mmm 🙂 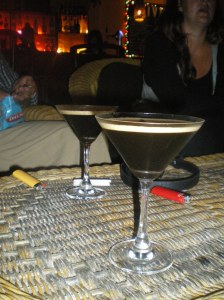